History of the Parish

A Potted History of Clay Cross

Clay Cross is situated equi distance between Alfreton to the south and Chesterfield to the north straddled across the A61, which was formerly the Roman Road Ryknield Street and was turnpiked in 1756. Though it was not mentioned in the Doomsday Book of 1086, it was incorporated into the larger medieval Stretton Manor of that survey.

The first documentary evidence so far uncovered records of Clay Cross in October 1538, when it appears in the will of John Revill of Shirland 'to the mending of the lane between Stretton and the Claye Crosse tenne shillings' In many wills and inventories and in the North Wingfield Parish records Clay Lane and Clay Cross are used synonymously from the sixteenth century onwards.

Clay Cross was situated in the Scarsdale Hundred, the ecclesiastical parish of North Wingfield and the surviving burial, baptism and marriage registers commence from 1567, and have been transcribed and with reasonable access for family and local historian through the North Wingfield History Group.

For taxation purposes Clay Cross was in the constablewick of Stretton where the manorial constable collected such taxes as hearth, window tax, horse tax and hair powder duty etc. The caput or head of the Stretton Manor was situated down Clay Lane on the site of the Stretton Hall Farm but was later transferred to Henmill where the Baron Court Leets were held on a regular basis and several manorial court papers have survived.

With the burgeoning population of Clay Cross and it`s attendant areas the Township of Clay Lane established the Clay Lane Board of Health, after some resistance, in 1875, when the first election were held. This Local Board began to take on the responsibilities of street lighting, highways and the health of the town etc and was the forerunner of the Clay Cross Urban District Council which was established in 1893, and also incorporated the minor responsibilities of a Parish Council.

On the 1st July 1961, Col. H. Jackson of the Clay Cross Company presented a badge of office to Cllr C. Holden, chairman of the Clay Cross U.D.C. On presenting the gong, Jackson stated that 'he believed that politics should not enter into local authorities ' and to solve the problem of what coloured ribbon - red or blue - the decision was in favour of a maroon colour, giving each side an equal showing.

From around the mid 1960's the various labour chairpersons did not identify with the trappings of officialdom, like their successors have, and refused to wear the Chairman's gong. When the U.D.C. ceased to exist in 1974, with the reorganization of local government and the implementation of the notorious Fair Rent Act the medallion was donated to the British Labour History Museum. Unfortunately, the medallion was stolen from this museum and was reputed to have last been seen for sale on a Liverpool carboot sale.

Clay Cross is now administered largely by the North East Derbyshire District Council and the establishment of the Clay Cross Parish Council has taken on the residue of the Old U.D.C.

For hundreds of years the Stretton Manor has obviously been dependant on farming for its survival and situated in the Clay Lane Township were two water powered corn mills and a windmill . One water powered cornmill was situated down Clay Lane on Mill Row but was demolished to make way for the tunnel and was replaced by a steam driven cornmill which building still survives today. The other water mill was the Henmill situated at Holmgate and the windmill was erected just off Market Street and on Bertrand Avenue.

The agrarian developments can be evidenced in the hundreds of inventories that have survived and are currently being transcribed for a more serious history of the area. However, long before George Stephenson arrived there was a little industrial diversification with a blast furnaces at Stretton situated along the Spoil Banks down Clay Lane and the other at Parkhouses at the bottom of Hag Hill, Pilsley in the sixteenth century.

Also the area is situated on the basset of the outcropping coal measures particular on the ridge at Stretton and coal has been mined from this outcrop for several hundreds years before Stephenson arrived and one of the main collieries was called the Clay Cross Delph Pits. Documentary evidence shows coalmining from the mid sixteenth century with a reference to coal being dug at Holmgate and the archaeological evidence unearthed on the Roman Road in the 1960's indicates that coal was transported along it at sometime in the long past. However, by the end of the eighteenth century much of the coal on the basset at Stretton had been exhausted and the implications of the 1777 Stretton Enclosure Award prohibited further mining on the Stretton Commons.

Whilst the turnpike road that improved the line of the now A61 in 1756, helped to enhance communications and no doubt facilitate more coal traffic it was not until the arrival of the railway that coalmining in Clay Cross and surrounding districts really took off.

In February 1837, the mile long tunnel that runs under Clay Cross was commenced and was the most difficult stretch of the 72 mile stretch of the North Midland Railway that commenced at Derby and terminated at Leeds. George Stephenson was the consulting engineer for the N.M.R and was well aware of the potential at Clay Cross. With an abundance of coal at a relatively shallow depth and when the coal seams were proved he established the George Stephenson Company, a one man affair in 1838/1839, and not in 1837, which historians quote ad nauseum.

The first few years were experimental but the company soon embarked on establishing a classic vertical integrated firm with large colliery developments, coke works, brickworks, gas works iron furnaces and foundries. Also they exploited the nearby Crich limestone quarries and erected limekilns at Ambergate and later their inheritors quarried the limestone at Ashover and established a narrow gauge railway to transport it.

All this history has been well documented by Dr. Stanley Chapman with his brief business study of the Company 1837 to 1987; Cliff William's Driving the Clay Cross Tunnel, together with three pictorial volumes of the town and a M.Phil thesis about the Clay Cross Company's brand of paternalism; Bob Gratton and Stuart Band's study of the Ashover Light Railway, David Skinner and Julie Langdon's Rent Rebels; and finally the late Terry Judge's Clay Cross Calamities. Also work is on going with regards a volume about the six townships of North Wingfield that will figure the Clay Lane Township and anotherbook that is about the history of the north east Derbyshire coal industry but will largely figure Clay Cross. 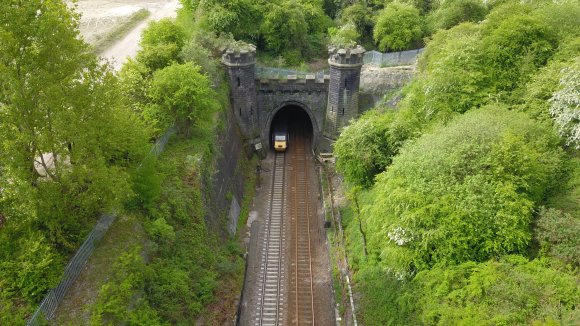 CLAY CROSS is an ecclesiastical parish comprising the townships of Stretton, Clay Lane and Woodthorpe, formed 6 Feb. 1852, from the civil parish of North Wingfield, a small portion of Stretton, however, being in the parish of Shirland. Clay Cross is 5 miles south from Chesterfield and 139 from London, in the Chesterfield division of the county, Scarsdale hundred, a sub-division of Alfreton petty sessional division, Chesterfield union and county court district, rural deanery of Chesterfield, archdeaconry of Derby and diocese of Southwell. Here is a station on the Midland railway, which passes through the iron works by a tunnel 1 mile 140 yards in length.

The "Local Government Act, 1858," was adopted here 14 May, 1875, and the township is governed by the Clay Lane local board of nine members and well lighted with gas and supplied with water by the Clay Cross and Waterworks Company.

The church of St. Bartholomew, built in 1851, is an edifice of stone designed by Mr. Stevens, architect, of Derby, and consists of chancel, clerestoried nave of four bays, aisles, south porch and a western tower with spire containing 6 bells: vestries were subsequently added and the chancel altered at a cost of £700, under the direction of the late G. E. Street esq. R.A. : there are three stained windows, one of which, erected in 1880, is a memorial to Mr. H. Howe, engineer, and another, placed in 1878, is a memorial to Mrs. C. Binns : there are 500 sittings: the church and churchyard were closed to interments 1878-9. The separate register dates only from the year 1851 ; all previous entries relating to this place are in the parish registers of North Wingfield. The living is a vicarage, average tithe rent-charge £39, net yearly value £286, with residence and 3½ acres of glebe, in the gift of the rector of North Wingfield, and held since 1888 by the Rev. Henry Sharpe Oldham A.K.C.L. The church of St. Barnabas, situated at Danes Moor, and erected in 1883 as a chapel of ease to the parish church, is a building of stone, consisting of chancel with vestry, nave, south porch and a belfry, added in 1887: there are 220 sittings. The Catholic chapel, dedicated to St. Patrick and St. Bridget, was erected in 1862 and enlarged or rebuilt in 1882.

There is a cemetery of about 4 acres, with two mortuary chapels, the site being a gift from W. G. Turbutt esq. of Ogston Hall; it is under the supervision of a burial board of nine members. The Clay Cross Institute and Public Hall has an excellent library and is provided with a good supply of papers and periodicals.

The Clay Cross Colliery and Ironworks Company employ about 3,000 hands. The Clay Cross and District Ploughing Association holds matches annually, in October. The principal landowners are Major W. G. Turbutt J.P. of Ogston Hall, Joseph H. Dixon esq. and the Clay Cross Company. The soil and subsoil are clay and loam; chief crops, wheat and oats, with some land in pasture.